While I had the honor of flying the U2 Spy Plane during my USAF career, I had a “bucket list” item that I just had to do while I could still do it. Since I was 10 years old, I had an acute affection for the P-51 Mustang. I made models of it, read books about it, and drooled over it at airshows. The North American Aviation P-51 Mustang, an American long-range, single-seat fighter and fighter-bomber, was used first during World War II, and is credited with helping win the war by ensuring Allied air superiority and protection for our bombers in Europe. 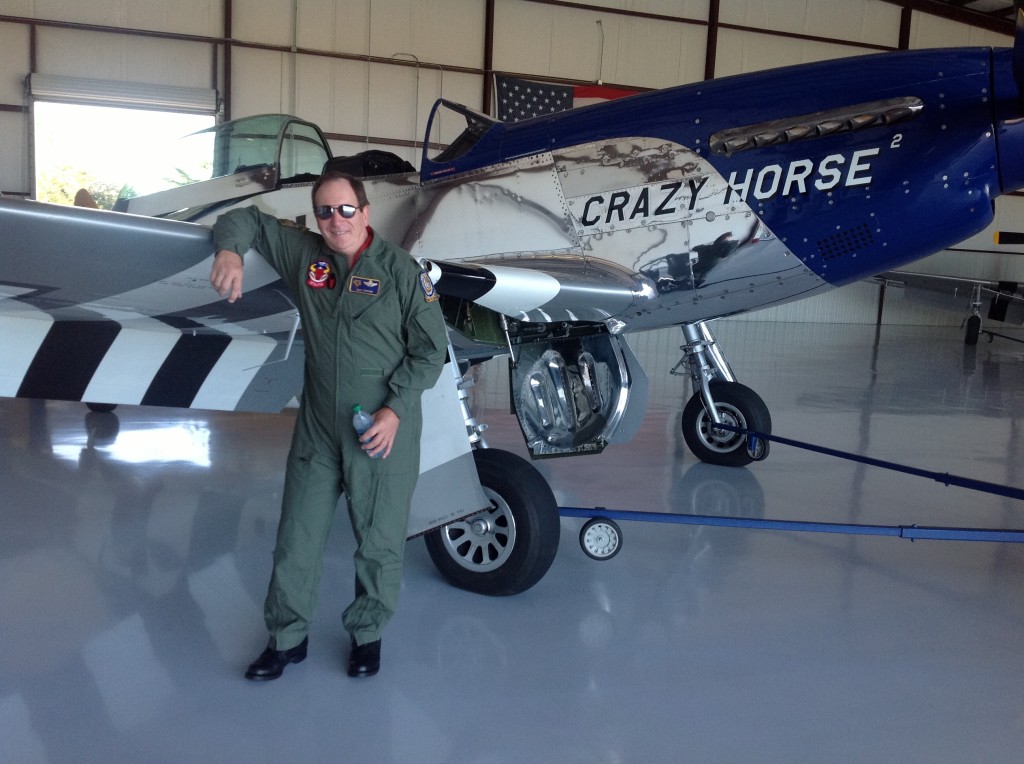 There are not many of them left in the world, and the two-seat versions are even rarer birds. During May of 2013, at a book signing in Washington DC, I was introduced to a new friend. Even though Art was not a pilot, our conversation drifted to the subject of airplanes and found we soon discovered we shared a common bucket list item: Fly the P-51 Mustang!

THE SEARCH IS ON

After corresponding with Art over the next month, we decided to head down to Florida and fly with Lee Lauderback’s Stallion 51 operation. By all measures it seemed to be a first class operation. The next few months made us realize it was the only choice. Art and I corresponded via email and phone. I sent an email to Stallion 51 in mid-June and had a very timely response from Julia. I had put in a request for a two-ship flight; me in one aircraft and Art in the other. This, as we learned, was not a normal request; and it was also complicated by the fact that some of the Mustang pilots there had vacation scheduled, but it all seemed that it could come together.

I remember where I was standing in mid-July when the phone rang and it was from a Florida number. “Hello,” I said. The voice from the other end said, “Hi, I am looking for Sam Crouse, this is Lee Lauderback calling from Stallion 51.”  I had read about Mr. Mustang, as he is called; now I am in my living room talking to him on the phone. It was a great conversation. After exchanging pleasantries, Lee told me he was going to work hard to arrange the schedule so that there would be two airplanes and two pilots. He then asked what we wanted to do. I told him that Art was not a pilot and a little bit about him, and that I had a pilot background. Then, in pilot lingo, I rattled off, “formation take-off, split up enroute to separate areas, aerobatics, then rejoin for a formation return to a pitchout and landing.”  We chat a bit more, and he asks me about my pilot background. I run through my normal litany of planes I’ve flown, and he says very kindly, “Hell, I’ll just give you the keys.”  While that was a very nice comment, it served more to convey a message of trust and humility between the two of us. He pledged to put a note in the file and we would touch base closer to the date. Within seconds of hanging up with Lee, I was on the phone with Art.

Art and I were banking on planets lining up: a second pilot, cooperative weather, good airplane maintenance, our health, and other unknown schedule impacts. We both arranged to arrive in Florida a day or two early and stay a day or two late. This would make sure we got there, and that if weather or maintenance problems arose, we had a backup plan. Also, due to mid-September Florida weather, we started watching the hurricane tracks a week or so out. I had already opted for a morning flight, so we would’t have to pay homage to the afternoon thunderstorm gods. We started to talk like we were going to a prom; “what are we going to wear?” Hell, we had to look good, and the only choice was to look like a pilot, so: fight suits, patches, boots, scarves, gloves were either procured from my aviation museum (as my wife calls it), ordered or borrowed. We were going for it! For mental preparation we started pouring over P-51 flight manuals we found online and comparing notes. Art even found a 3-D online cockpit simulator he shared with me. 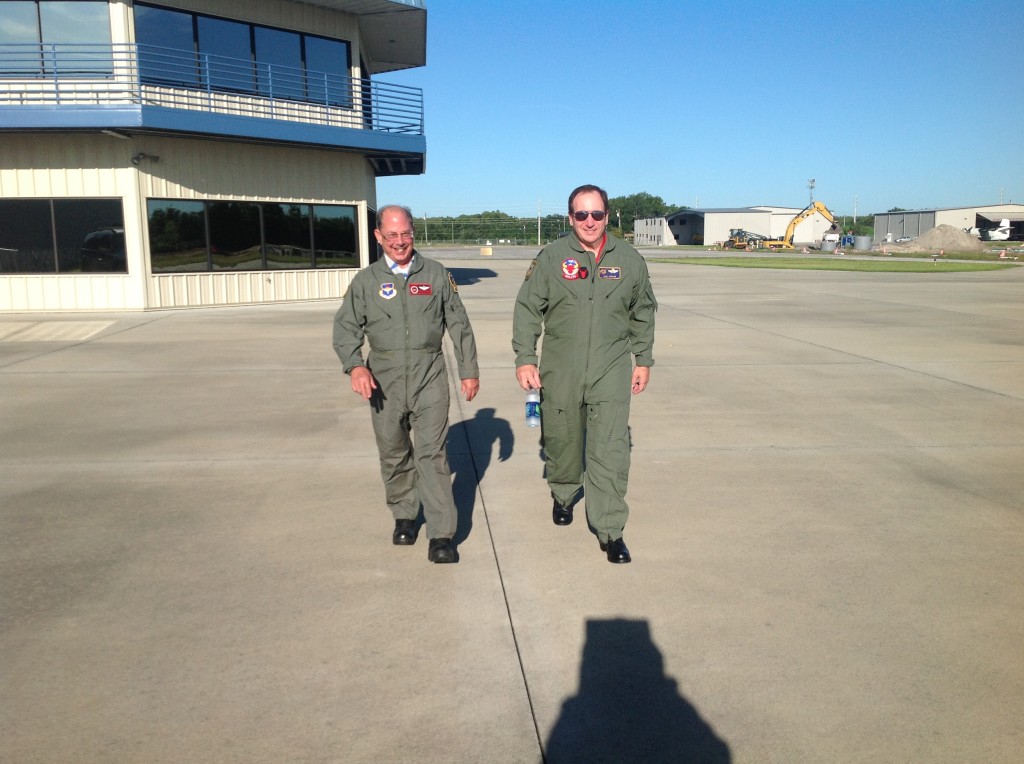 We got to Orlando and the fun began with a rendevous at a local bar, dinner and smiles that could not be stifled. We were there, in place, the weather was cooperating and we took a drive by the hangar just to make sure we knew where to go the next day. On the morning of the flight we went to breakfast at the hotel all decked out in our flight suits, scarves and patches. We got to Stallion 51 like two kids ready for their first roller coaster ride. We entered the hangar and there they were. Two of the most pristine P-51 Mustangs anyone could imagine sitting on a floor that you could eat off.  We were there. We asked the mechanic, Greg, who was busy babying the two mighty birds where we go. Greg welcomed us like family and showed us the stairway to flight operations. He was a former Navy Crew Chief and you could tell how much he loved his job and the airplanes. Art and I stopped along the way to admire the displays of the Mighty Merlin engine, the 50 caliber machine guns and pictures. In the very nicely appointed sales area and were greeted by Julia, who makes everything work in style! 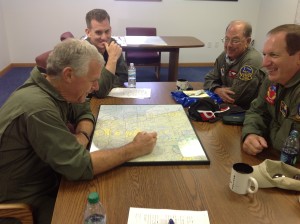 We checked in with her and took care of the business end of the deal, spent more money at the gift shop, then waited until we were greeted by Lee and John, our lead pilots. Art spent some time with John and I spent some time with Lee chatting separately getting to know each other and talking about flying. Once that was complete, we all gathered together for a formation briefing. As a former military instructor, I’ll say this was one of the most professionally run briefings I had ever seen. For Art, they explained everything to him as a novice. I marveled at how these two professionals flying such vintage aircraft understood their students’ differing levels. Everything was tailored for us to ensure we knew what we were doing. We had a blast as the photo below suggests. John and Lee both ensured we were ready. 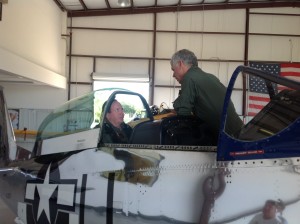 It was time to head downstairs, get into the airplane and go fly. On the way down to the hangar, Lee told me, “Sam, forget everything you have read about the Mustang and let’s just go fly!” He knew I had studied the manual and read a lot about the airplane, but wanted me to experience the flight without too much thought. It was a good tip!

Everything was briefed and executed like clockwork. We went over cockpit familiarization items and egress procedures and soon it was engine start time. The roar of the Merlin was awesome and our taxi out, run up and line up were complete. 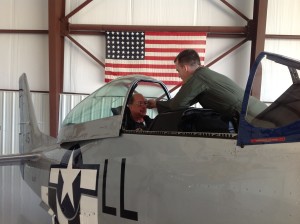 We took off and Art and John were soon on our right wing as we flew out to the area. I flew the aircraft soon after lift-off and pretty much had it the entire flight with coaching from Lee. Once we were to the practice area, Art and John split off and I went through a series of maneuvers. Some gentle turns, wingovers, normal stalls, accelerated stalls, Barrel Rolls, Aileron Rolls, Cuban 8s, Loops, Immelmanns, Split Ss, and Reverse Cuban 8s. It was a total blast and a perfect day for flying the Mustang (go to the top right sidebar of this page to see “Two Minutes with Lee and Me). We rejoined on Art and John (well, Lee did the rejoin) and I then took it for the rest of the flight. We reported Initial for Runway 06, a left break and took spacing, and I got to land the Mustang – what a superb day! 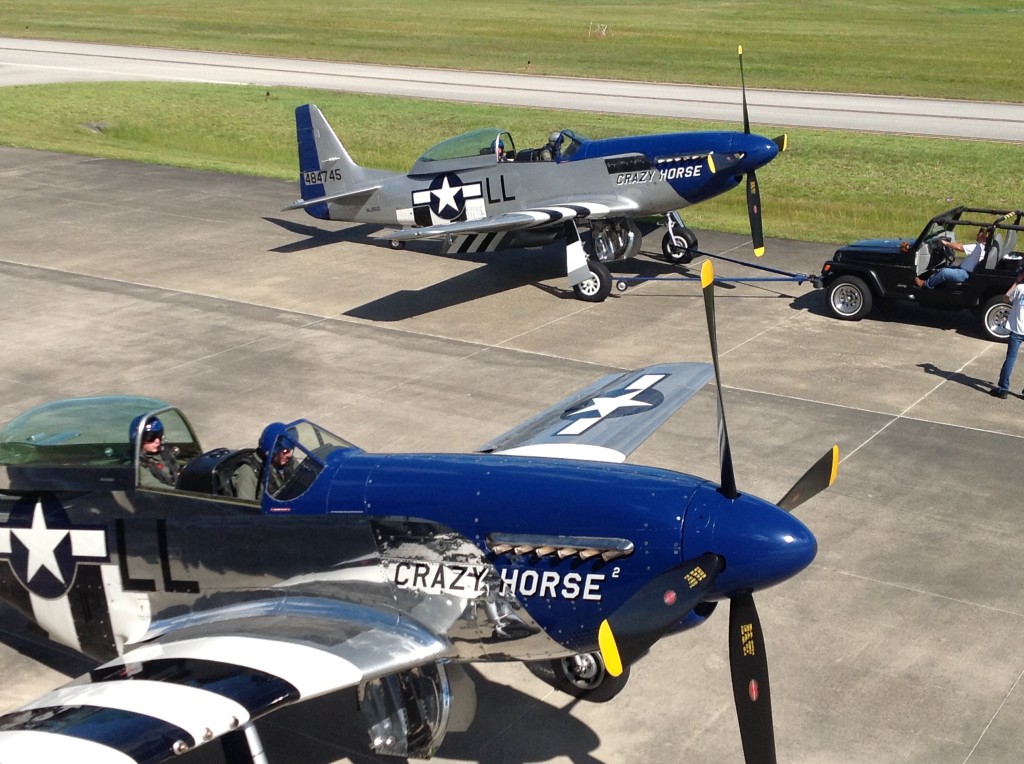 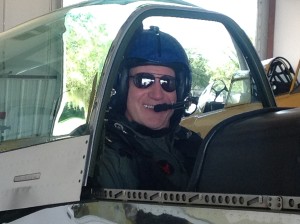 We taxied up to the ramp, got out and greeted each other with beaming smiles and handshakes. Later, upstairs we were treated to a debrief using our films. Lee’s Mustangs have three cameras (one on the vertical tail, the horizontal tail and the cockpit). Art and I both got our “tapes” after the debrief. Lee and John took turns describing the flight to help reinforce learning, just like any instructional flight. We were also given certificates and pictures. I had prepared a special gift for Lee, a special bottle of wine we had made for the U2 50th Anniversary and signed it for him. For Art and for me, this was very special day, and we did something few get to do. Art, who had a very distinguished US Army career, was always intrigued with Area 51 stories. I knew some of what he did in the Army, and always thought he had been there. In any case, that day Art and I slipped the surly bonds of earth. We are still talking about it! 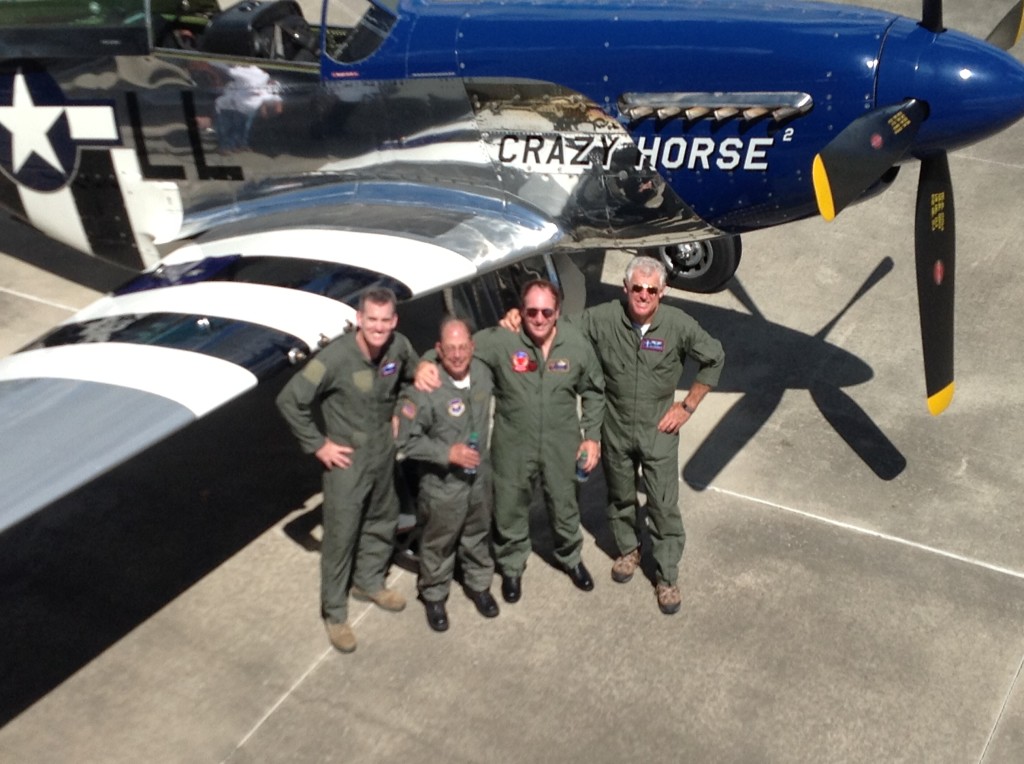 If you want to connect with me, click on the LinkedIn icon (located at the top or on the right side) on this site.